I fell in love with a dandelion last week. And when it died, I mourned it.

My children have been knocking the heads off dandelions a lot recently. It’s something I have mixed feelings about. Contrary to the perfect lawn culture I grew up in, I have a lot of respect for the resilient and versatile dandelion. But I also see that children help them spread their seeds around. And I see that the survival of the hardy dandelion isn’t threatened by children’s games. And I am always trying to strike a balance with nature – with nature and kids in particular – between joyful and immersed interaction and respect.

A few weeks ago, as part of some learning about plants I’m working on right now, I chose a dandelion plant in my backyard as a focal plant to observe over the next three seasons.

I knew that it would be hard to protect a dandelion in my backyard. But I had clearly voiced to my family my desire to protect this one. And I had decided as a method of observation to carefully sketch the plant every few days. I felt kind of blissful realizing that I could learn about this plant while doing something else that I loved and wanted to practice more often.

In two days of lovingly sketching “my” dandelion and others, I already knew more about the stages of the plant’s development than I ever had before. I observed and admired the bright yellow ray of florets, the graceful curves and tapers of the toothed leaves, the translucent green of the elegant flower stalk. I watched the yellow flower close for a period of time to undergo a transformation, with the dried florets slowly pushed up out of the flower by the combined force of perhaps more than 150 tiny single-seeded fruit attached to silky pappi.

I was waiting, anticipating the bursting open of the delicate perfect sphere of the seed head, anticipating its daily dance with the wind and the gradual dispersal of its tiny floating seed progeny out into the world on their silken parachutes. Anticipating the slow wilting of the flower as the plant’s energy travelled underground to the deep taproots, digging down and breaking up the soil, aerating it for other plants to grow.

But as my family prepared for a late-spring dinner in our backyard one evening, I stepped out onto my back steps, looked at my son standing with a strange look beside the tomato bed, and instinctively said: “Remember not to touch that dandelion!” Right away, I knew by his stricken expression and hunched shoulders that it was too late. He burst out crying, I burst out crying.

It was so clear that he felt terrible already, but I had a knot in my stomach and tears in my eyes and needed to speak my distress. Recently, I am often surprised by my intensity of emotion.

“Why would you do that? I don’t even understand why you need to keep hitting at dandelions! And I asked you specifically not to touch this one! I’m so disappointed!”

I went into the house and sat on the couch shaking. I had felt deep satisfaction imagining myself carefully watching the growth of this plant, imagining myself developing a relationship with it over many months, imagining the reciprocity of tending for the plant as I learned from it.

Was it futile to think that I could keep a dandelion alive for that long? Couldn’t I protect just one plant? Couldn’t I watch it move through its growth cycle in peace? Could I convince anyone of the value of a dandelion?

Was I upset because my plans were disrupted? Or was there an energy that flowed from me to the dandelion and back again, through my careful observation and loving attention that in those moments was a little like love?

Paying attention to anything or anyone so raptly plants the seeds of connection. Connection nurtures love; perhaps it’s the same thing. And love leads to caretaking, to protecting, to reciprocity. Connection, love and then caretaking: as my eyes are open wider to the world, I see this pattern, over and over again.

This is not to say that death doesn’t belong in this cycle; it’s inevitable and even necessary. I am not sentimental about this. To be human is to face the truth that we can’t live on sunshine and rain: we must kill other living beings to survive. But there is the cycle of life and death and rebirth, and then there is random destruction. There is the reciprocity of picking dandelions and cooking with them, of savouring the bitter young greens in a salad, of digging the root and using it for medicine, of feeling gratitude for what these things bring into your body. There is also the careful stewardship of a space, a healthy habitat, that sometimes requires choices about what will live and what will die.

And then there’s death or destruction without a purpose. A broken connection; a broken cycle. And that break brings mourning.

It’s easy to fall in love with the big and beautiful: moose, foxes, deer, sandhill cranes, owls, and I have done that too. But it’s the more humble beings, like dandelions, like dragonflies, that catch me by surprise.

Last fall, on the small farm in Poland where my father grew up, I sat under a mountain ash and read from David Abram’s The Spell of the Sensuous. It’s a hard book to read; in many ways it’s a highly articulate anti-book, an ode to the primeval language of the pre-literate world and of all the communicating living beings with which we are in relationship. It’s a book that’s best read outdoors, in small bursts, with all senses open to what the world is saying.

As I read, dragonflies flew all around, dozens of them, as well as maybe hundreds of European Peacock butterflies, dark orange with two purple eye spots on each wing. As I held my open book on my lap, a red dragonfly landed on the dazzlingly white page. It perched – if that is what a dragonfly does – and faced me. I raised the book higher and stared at the dragonfly. It stared back at me with its giant compound eyes. I understand that dragonflies have much clearer vision, in the human sense, than many other insects. But I don’t really know what it saw. What is the world-view of a dragonfly?

What it looked like to me, however, was that the dragonfly was watching me as I was watching it. It was a strangely astonishing display of mirroring. I looked quizzically at the dragonfly; it cocked its head to one side, then the other, and again, as if was looking at me with the same curiosity. Dragonflies, from a mammalian point of view, have remarkably appealing faces. Their compound eyes are huge and beautiful, and a raised section of the face in between those eyes, called the vertex, looks like a small round nose. A tiny earnest face stared unblinkingly at me as I stared carefully back. It was the most connecting moment I’ve ever shared with an insect.

When you look at something very closely, your perspective changes. When the dragonfly took off, I was almost thrown back with surprise. Its body swooped up huge towards my face, filling my field of vision, a giant prehistoric winged creature, iridescent and magical, communicating with me from another world. 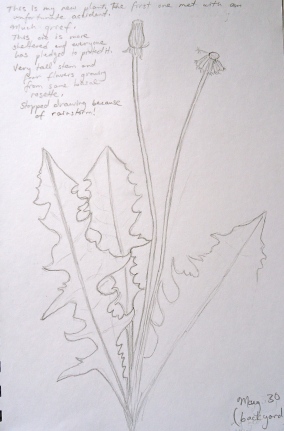 I have mourned my dandelion flower, and with my son’s help found another plant to study in a more sheltered spot. I have watched the metamorphosis of its flower parts, drawn it, and learned from it. The first dandelion has not produced any further flowers, but in truth, its leaves and root are still alive; there is still more to be observed, now that I have regained my perspective.

I have not since locked eyes with a dragonfly. But each moment of connection to dandelion, to dragonfly, creates a relationship that opens space in my heart for other strange and surprising encounters. In some way, it means that I have friends in the world that I didn’t once have, perhaps an infinite number, both curious and familiar; that as I pay attention, as I take care, I am cared for in turn.

The world is full of remarkable beings, of beauty, of curiosity, of connection, of love. My work – our work – is to recognize all these beings as part of our community, part of our family, and to treat them honourably and with care. Our work is allow our selfhood to be a little more permeable than we once believed – not only to other humans, not only to our familiar domesticated creatures, but to all of the wild. To all of the beings that seem nothing like us, that we think we can’t possibly understand, that have gifts and abilities well beyond the scope of the human, but that are our relations nonetheless.