I am feeling grateful and excited recently to have resumed a semi-regular drawing practice. When I was a child, art was the thing that I did. Art and reading. Writing came much later, and writing was for a long time functional and obligatory – I wrote because it was something that had to be done, for school, for work, and sometimes for myself. I was a “good writer” and so I was asked to write and I wrote; and as I wrote, I learned to love writing.

My personal writing in my teens and twenties was sporadic and unsatisfying. I would start a new journal, write in it for a while, lose patience with the self that emerged in my writing, and discard the notebook. Simply put it away in a closet. And then a year or two later I would find a new notebook, the beautiful blankness of which would lure me into trying again.

It was only in my early thirties, when I was working on an education degree, that I started to recognize that the self who I recorded in my journals was incomplete. I had the epiphany that I should stop separating out personal writing from all the other parts of my life. Personal reflection, class and workshop and meeting notes, outlines for papers and presentations, quotes that inspired me – all went into the same notebook. It would be my “everything book.” This was the only way I could integrate. It was what worked for me. It meant that I would no longer lend out my notes to classmates, that I was more conscious of where my notebook was when I was out in the world, but it also meant that there were useful things in it that I wasn’t prepared to discard, so I pushed on. I didn’t hide the parts of myself that I didn’t like. I allowed all of me to stay in one place, and kept on writing.

It seems strange now, having for the past eight years or so developed a more and more regular writing practice, to think back on a time when I would journal once or twice a year, in times of extreme emotion. Now I watch my notebooks pile up. I remember the first time I filled one in six months, I was pleased. Then in four months. Now I’m down to two. I wonder what I was doing all of those years that I wasn’t writing, how I managed to process and observe and spill out everything that needed to be spilled, record everything that needed to be recorded.

I wonder when something moves from a sporadic choice to an indispensable and life-sustaining habit. Where is the tipping point?

When I was a child and into my mid teens, I spent a lot of time drawing. It’s not that I ever fully stopped, and there was no-one who forbade me to further pursue art, but there was a point in my late teens when there was a rueful sense that it was not something that had a future. My family were all scientists, practicality was valued over creativity and risk, and there wasn’t a mentor, in that particular moment, who could have pulled me through that disconnection between the things I loved and what the world seemed to demand of me. It is something I often wonder about, how that happened, why I agreed to it, what would have been different if I hadn’t. Whether I was also in part afraid of being seen, of creating work that would have to be shared, which would force me to emerge from a protective armour that I was then diligently constructing. Whether I was afraid of making mistakes, of not being able to compete in the way I felt I was required to. All of that. 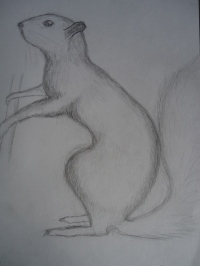 I don’t want to linger on the reasons and regrets right now. Looking at the past or the future, of course, creates a heavy burden of meaning on something that I simply enjoy. Something that focuses my awareness and attention, takes me out of the discursive realm and into the parts of my brain that aren’t constantly needing to explain themselves with words. Something that brings me joy in the moment. And that helps me observe and integrate things that I want to be more present with, that I want to see more clearly.

My sporadic sketchbooks over the years were like my sporadic written notebooks – a burst of enthusiasm and then frustration and rejection. And maybe years later, trying again. And so now that I am keeping everything in place, not ripping out pages or putting my writing or art into dark boxes and closets, what happens? Where do I go next? Can I sustain this?

In the past couple of years, because of the naturalist learning I have been doing, I found myself drawing more often again: plants, animals, tracks. It was a place of integration for me, to find a way to use my attention and record something that I could look back at, both for learning and pleasure. A way for my eye and heart to take in and savour the details that I might otherwise pass by.

I saw this quote from Thoreau written on a wall the other day: “It’s not what you look at that matters, it’s what you see.” 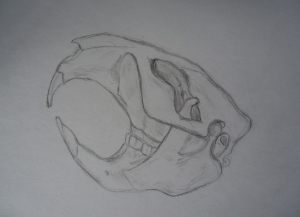 Recently, I have found myself taking some classes with a wildlife artist, and have found a friend to meet for regular drawing sessions of animal specimens at the local museum. And the past couple of months, I have been drawing/painting/collaging something for inspiration every day. I’m finding this very satisfying right now. And I don’t know where it’s going, if it’s going anywhere at all. I am staying present to following the threads, watching them weave together to see what continues to emerge.

Do we all have those secret childhood passions? Who puts them aside and who doesn’t?  How do we make sure our children hold on to theirs? Why does it sometimes feel harder and riskier to reclaim the deepest, oldest passions? And how long do we need to beat ourselves up about the things we loved and left behind before we can simply put those regrets aside and start doing all the things we love, day by day, even if only in the spare moments?

I am not finding this free wordpress format super satisfying for placing photos in the way I want.  Apologies for the slight clunkiness of the formatting.